EHMA at the WHO Primary Care Advisory Group in Almaty, Kazakstan – June 2017 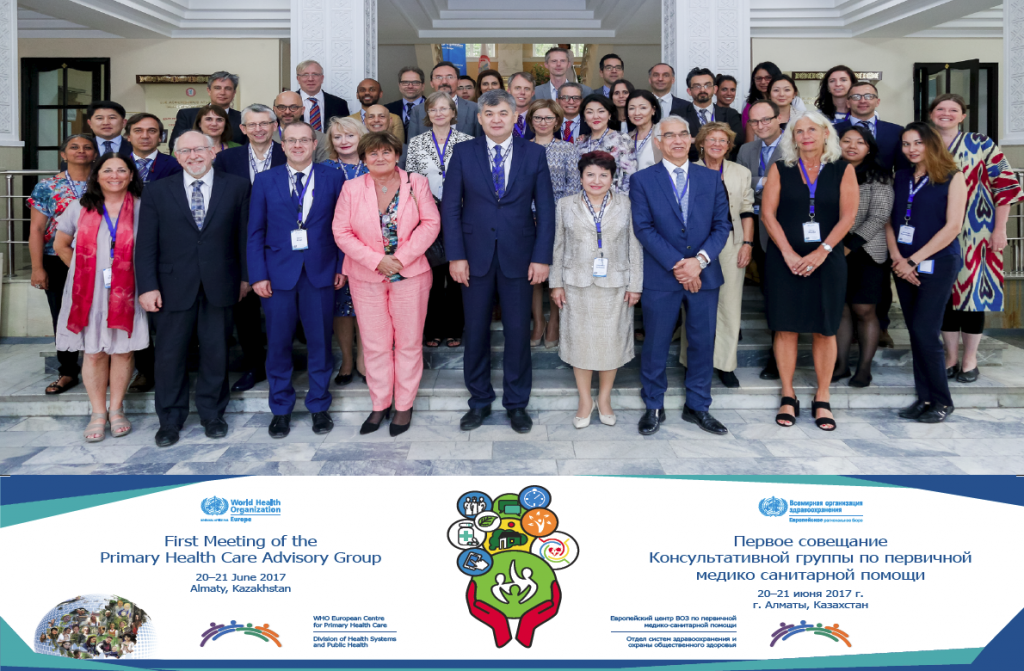 EHMA plays a number of roles in supporting its Members and Member Organisations, one of which is the contribution it makes to European health policy and practice through its membership of international bodies such as the European Commission and the World Health Organisation.

The WHO European Centre for Primary Health Care is based in Almaty, Kazakstan, was established in 2013 to focus on four core pillars: Knowledge Synthesis; Country Support; Policy Analysis and Alliances and networking. The WHO Primary Care Advisory Group was established in 2016 to support the work of the ECPHC and held its first meeting in June 2017. The 20 Members of the PHC-AG which includes the European Health Management Association has been established to share perspectives, experiences and expertise for evidence-based policy advice with an initial focus being on the renewal of the primary health care principles, first established at the 1978 Declaration of Alma-Ata.

Membership of the PHC-AC includes representatives from organisations that range from Imperial College to the Association of Doctors. The European Health Management Association is one of only a small number of NGOs invited to join this influential group and as your Director I am keen to ensure that the EHMA Membership are kept informed and involved in its work.

Our first meeting held over two days in June of this year in Almaty, Kazakstan was built around thematic presentations and discussions on primary care, which will be written up to form context for changes to the WHOs vision for primary care as well as the guidelines to help shape its work programme. During such discussions, I sought to ensure that the views of EHMA were reflected and considered. I made a number of interventions that highlighted the need to ensure that the connection between teaching, training and health management was valued and I also stressed that EHMA believed that there is an increasing gap between health system policy and health system delivery and as such that there is a need for organisations such as the WHO to further strengthen their Knowledge Synthesis and Country Support activities.

My own reflections on the tone and focus of the discussion was that the commitment to the principles of primary care remained very strong, but that there was a recognition that change drivers were moving and that primary care was finding it difficult to make its voice heard in a resource constrained and increasingly complex environment. Yet there was a common view that primary care remains the anchor point for a population health focussed approach and that increased efforts need to be made to ensure that the value of primary care is recognised by politicians and that effective practice is delivered.

The PHC-AG is scheduled to meet twice a year and I will seek to ensure that the views of EHMA Members are fully reflected in the work that I undertake, with this process led by the EHMA Primary Care Special Interest Group, chaired by Dr Antoni Peris.

Please do take the opportunity to visit the website of the European Centre and forward the Secretariat any thoughts or reflections that you would like to see included in forthcoming discussions. I will continue to keep you updated on the work of the PHC-AG as we build towards the 40th Anniversary of the signing of the Alma-Ata Declaration in 2018.

Members of the WHO Primary Care Advisory Group